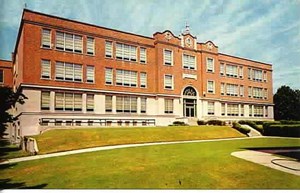 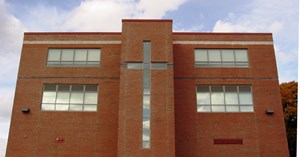 This unique project was a result of working on a glazing project for the new science wing. The project incorporated a bridge connector between the new and existing building. Where the bridge connected to the building, we had to replace two existing windows on the side of the bridge connector. In a project meeting, the president of La Salle Academy expressed a desire to eventually replace the windows in the existing building bringing it back to the original look. However, the original windows were typical wooden double hung windows. But the problem was, the president didn’t want to use overly large double hung windows, because he had concerns with having to replace balance hardware over the years. With that knowledge, the solution was to provide a project out vent window that would not use typical balancing hardware, but would incorporate concealed 4 or 6 bar hinge mechanisms.  We contacted one of our suppliers and investigated using a non-operable top sash installed over a project out vent window with the top and bottom lites of glass being offset to give the appearance of a double hung window. We provided these new windows in place of the architects specified product for the two windows located at the bridge connector.  We told the president of La Salle to live with them for a year and if there were no issues then we should explore the possibility of moving forward with a replacement window project.  After a year of use and with no problems we entered into a contract directly with La Salle Academy and worked on a 4-year program of window replacement on the 4 elevations of the building for 4 consecutive summers.

In order to find adequate structure in which to fasten the windows to, the existing windows had to be removed along with the plaster and lath around the window perimeters. We then installed new pressure treated wood blocking, spray foam insulation, aluminum window receptors, and sub-sill. The windows were then installed and all of the interior finishes were rebuilt to new condition.

By replacing the old non-thermally broken single glazed projected window with a new thermally broken window system with fully insulated perimeter, the school realized a tremendous energy savings as well as bringing the building back to the original look. 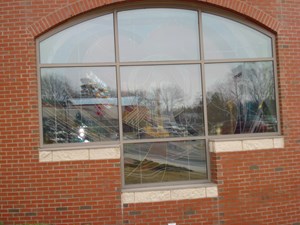 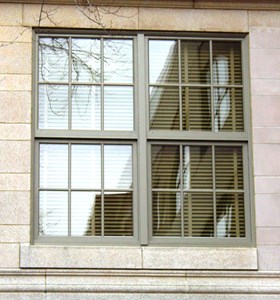 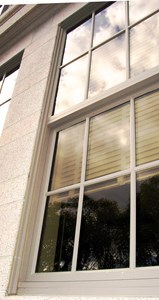